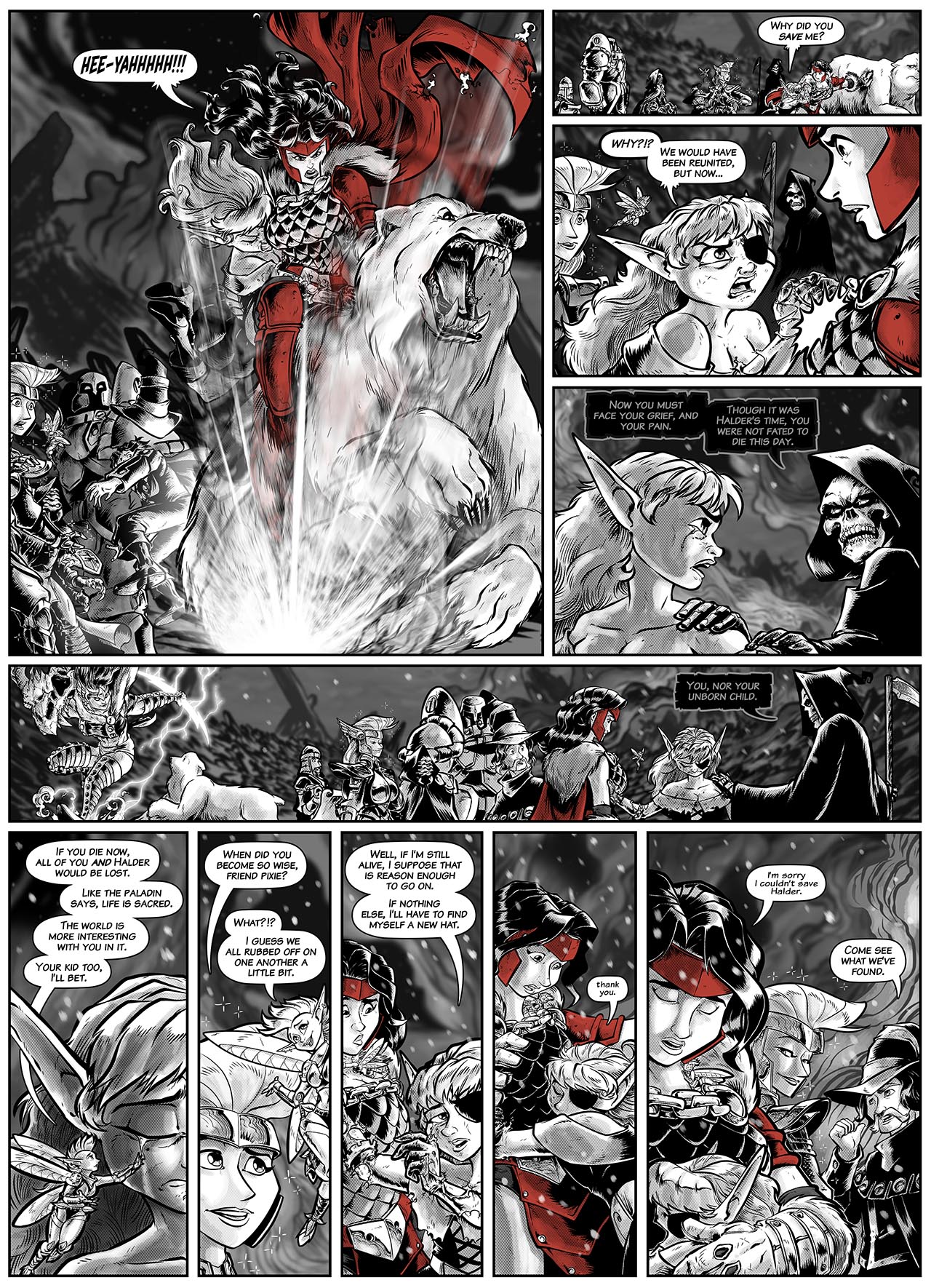 We always had plans for Cuddles, and eventually he got worked in here. I literally asked Dee for an homage to the old Rumple Mintz ad, and I got what I was after. Cuddles gets 3 distinctive acting jobs on this page, thus illustrating that even our walk-on characters get some character bred into them.

This page was a masterwork of acting, so I’m going to let Dee handle the lion’s share of the commentary here.

Ronni’s re-emergence from having shrunk them down small enough to avoid the blast was inspired by the linked piece of Frank Frazetta artwork, though admittedly it was subconscious. It was in my head, down to Ronni’s stiff-armed hold, but I didn’t reference it directly. Realizing it, however, I will fully admit my inspiration. 🙂

As usual, Ali gets knocked around a little. It’s on this page that I realized I personally don’t like the guy, as him getting knocked around the last couple of times was NOT in the script. Lol. I just like abusing the guy. That’s what he gets for being a jerk.

The rest of this page is, for the most part, pure “acting” moments that I loved digging into artistically. There are a LOT of conflicting emotions at play here with our heroes, who are processing loss and the fact that they all do care about each other at this point, on a deeper level.

Ronni’s red is more pronounced in panel one, as I made sure to showcase the elements of her outfit that still have her signature color, as that is a very super-heroic moment for her. However, as the story has gone on, she had taken more pieces of clothing and armor she’s found along the way and, as such, lost a LOT of the color that usually makes her stand out. This is a very intentional bit of visual metaphor we have enjoyed peppering in, as she has become much more a part of the group over time.

Flynna had to express a LOT in this sequence, from massive grief and pain, to an attempt at blowing it off, and eventually accepting some of her sorrow and expressing it in a way that challenges her usual facade.

I really wanted to show Ronni processing emotions she is NOT used to seeing, especially directed at her: gratitude. As many of you pointed out, reality isn’t her enemy in this strange place, so Flynna’s reaction here is strange to her. Back home, this would have created a new villain for her, and she takes a second to actually realize she is being thanked for what she did.

For Britomart, she is seeing both Ronni’s emotional growth emerge, which gives her some measure of pride, while also just being happy to see life being preserved amongst the group. Her emotions are more straightforward, but also fun to express.

And then there’s Lexii the Pixie. I adore this character and love drawing her. She got to have her moment of comfort with Flynna for sure, but her placement in the last three panels was, like Ali getting knocked on his ass in panel one, not in the script. But she’s fallen HARD for our heroine, and I really wanted to show her happiness at Ronni being okay. You have to zoom in to SEE it, but she is in there. 🙂