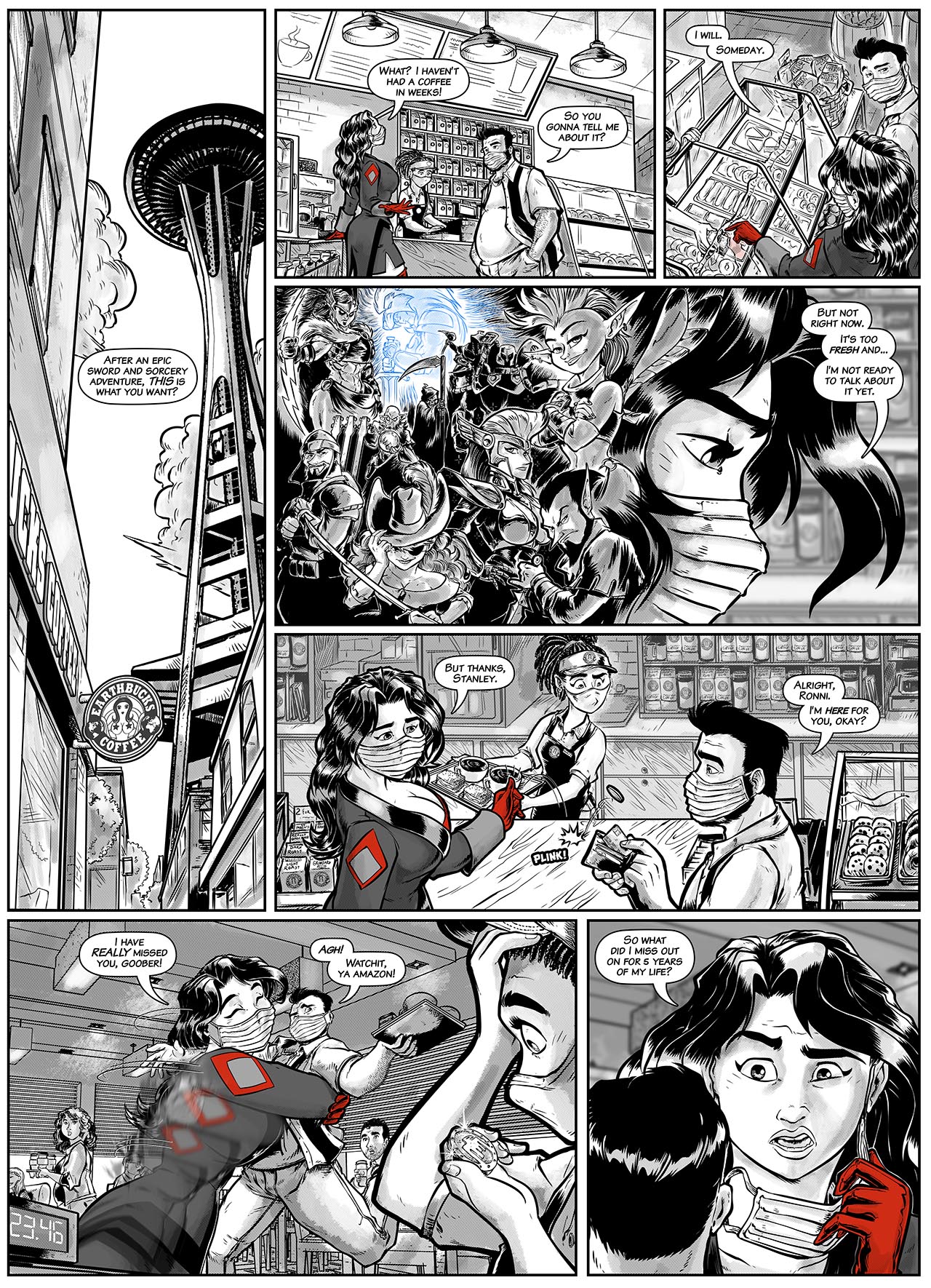 I mean, you can’t go to Seattle and NOT stop at an Earthbucks.

Turns out, this is a real Starbucks, in the Armory. And if you walk outside and look up, sure enough, there’s that epic view of the Space Needle. So of course we used it. Production value!

I deftly sidestepped a recap of everything the reader just went through to get here, all summed up in one panel of assembled memories of the Urth characters. Which looks amazing and will definitely be used as promo art. “I’m not ready to talk about it yet” was my dodge, and I think it worked well here.

Ronni, sight unseen, just flips out a coin from the hoard she just shrank off the floor of the witch’s parlor. Once Dee had it worked out it looked less like a coin and more like a medallion. So my thought is, with typical Giant Girl luck, she just flipped the most valuable item in the hoard as a tip for the barrista. I’m not even going to claim I have this all planned out- just leaving that one as a dangling plot thread and moving on.

The acting in this scene was a bit more challenging, because we had to have them masked. In a society trying to manage in a pandemic, we felt it was important for the characters to act responsibly. Which lasts until they sit down together. It’s an odd dynamic and one that will date the material, but that’s alright with us.

One patreon cameo on this page, and that’s the enigmatic Q!

That panel of all the heroes of Imperial Urth was a beast to pull off, but I’m so glad I put in the extra effort. Plus, there are things in there I’ve not gotten to draw in a while, and at least one character who died before I came on the book, which was fun. And any excuse to give Lexii the limelight, and I’ll take it.

As for the rest of the page, it also required stretching different muscles as I’ve not had to draw all that much of the more technical “real” world in a while. So lots of research to make sure it all looked right while trying to keep some of it loose so as to not drive myself mental.

Like Sabrina said, there is a Patreon patron cameo in there, and some of the characters from a novel series I’m writing also fill in the background. Randos will RARELY ever be really random. 😉