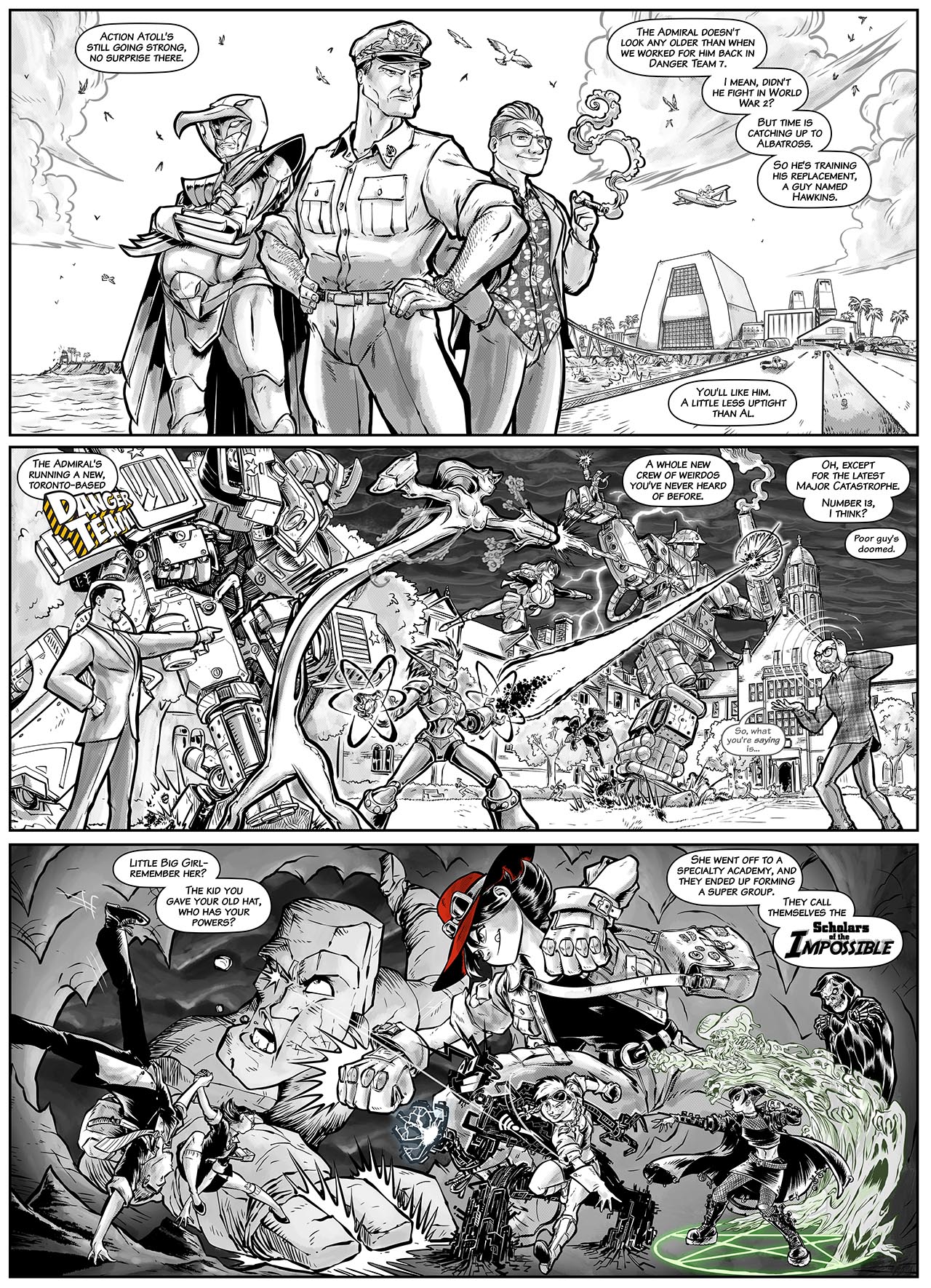 News of the World

There’s a Danger Team book I’ve written, that seems like it’s the first 2 issues of a longer story. In it I introduce Hawkins as he uncovers the truth behind Admiral Action, Action Atoll and the many incarnations of the Danger Team. To publish it I would need to do a kickstarter, hire an artist, construct at least the first issue then try to find a publisher. That’s how it seems to work these days.

Apparently I need to get better at the business aspect of this gig.

All that aside, here’s the south Pacific base of the Admiral, Action Atoll. From here rockets are launched, vehicles borrowed and occasionally funding and backup are to be had, at least for Giant Girl. Admiral Bradley Action holds the rights to the island, which he allows usage to a number of world governments, under the understanding that he is his own island nation. Complete with his own air force, navy and space program. We’ll be seeing more of him in the next issue… when we get there.

As the Admiral is the benefactor and recruiter of the Danger Team, we took this opportunity to introduce the Danger Team 22. Usually he forms one every 11 years, but the 2007 team was a change in that pattern, and that’s where Stanley met Ronni, as told in Issue 3. We debated putting names on all of the characters, but felt we could do that better in supplementary material.

For the record? Victor, Major Catastrophe XIII, Bubblegum Bazooka, Atomic Doll, The Mighty Barbie, Cyberninja and the Libtertarian. They’re battling Steampunk Rock and Sergeant Major Steam (who has yet to release his Battlin’ Bot Brigade), from back in Issue 4. If I keep writing that Danger Team book (that’s not got an artist yet) they all have backstories and plots, of course.

The Scholars of the Impossible is a high school for exceptional kids concept that I came up with as something to do with Maddie Lee, introduced in ‘The Other Giant Girl’ short story, and who got Ronni’s old big red hat back in issue 12. I developed the school, the staff and the primary characters, setting them up to be opposed by S8N’s School for Girls (from issue 13) amongst others. But I could never seem to get an artist to gel on the book, so it languished. This is that concept moved to the 4th season, essentially. The kids are young adults now,and the school is more of a base as alumni, as they are a globetrotting crew of adventurers.

I warned Dee in advance this was going to be a lot. I had designs and reference for some of these characters, but for others she had to generate the character concept art on the spot. All of which turned out great, and I am deliriously happy with the results.

This page was a hard one to get done and took a good bit longer than usual, but designing the characters on the page streamlined a bit of the process. There was a lot of creative back and forth between us on Discord with screen sharing, and the end result is a page I’m really proud of.

Plus, I finally get to draw some real superheroes! Woot!