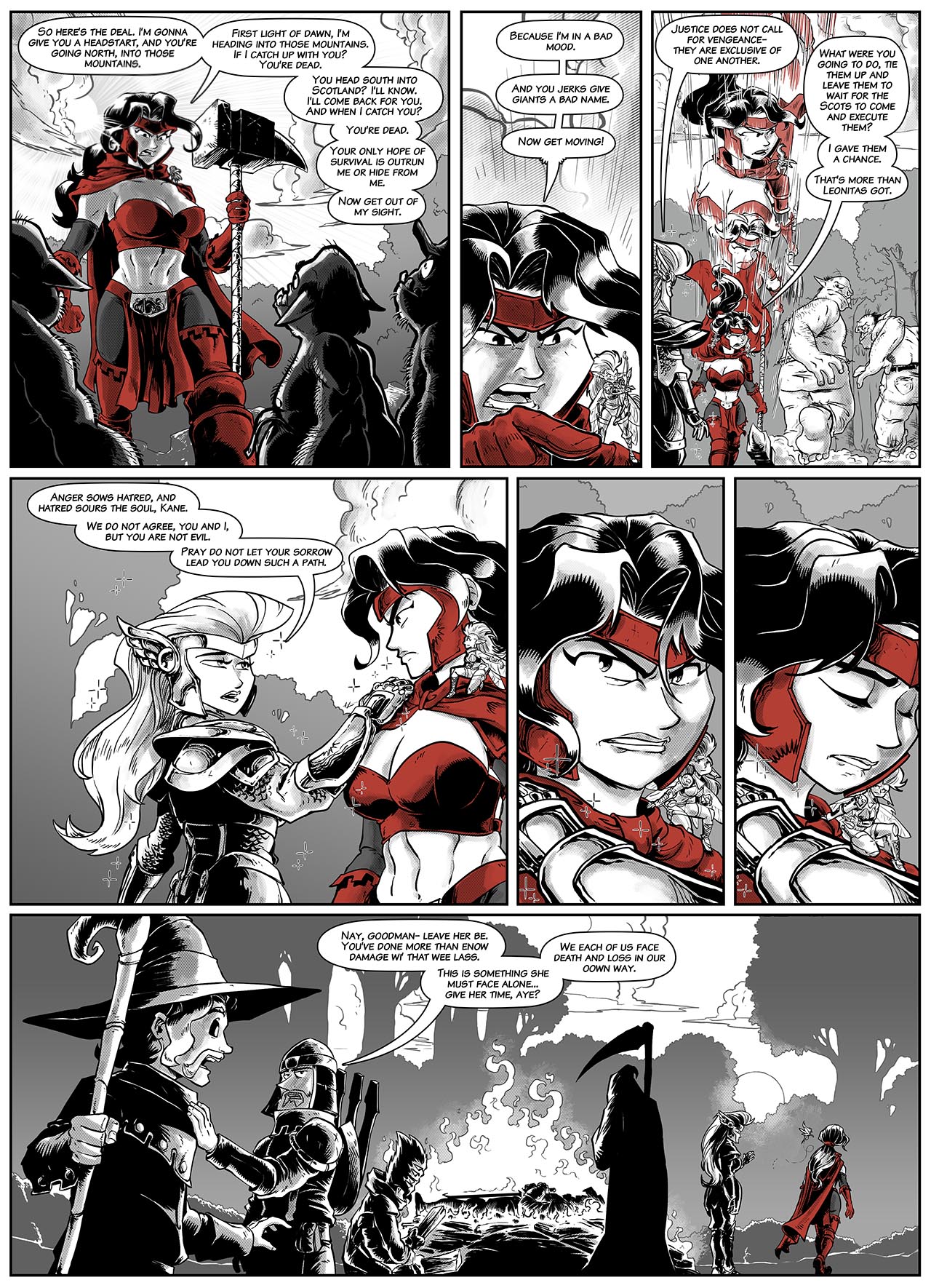 Well, that's the end of the Hillbilly Giants for now. Have no fear, they'll be back.

Backlit angry Ronni is a hint of things to come. I'm just gonna tease that for now, but in the upcoming pages, that 'sun behind her angry Titan' thing is going to be a thing.

I love how Lexi is the greek chorus in all of these panels. It's like she is a proxy for the reader, we decided while Dee was working out the page. As I pointed out that Lexii is usually orbiting Ronni, Dee took that to mean she can sneak her into every shot she likes, which as worked out really well for us on pages like this.

So Panel 3 raises a point. Ronni beats the giants with minimal casualties and injuries, and drives them north. She isn't going to just execute them and she doesn't want to watch the party slaughter them- which Britomart wouldn't allow because they surrendered and she promised to treat them fairly, and she has to be as good as her word. Paladins are like that.

But her take on how maybe that might not be the best choice will come back around later in the story.

On the one hand, I got some feedback that Britomart is high-handed and judgmental here, but I felt it was her actually trying to help Ronni. Keeping someone who is chaotic good at best on the path of good can be very important when they possess such power, and Britomart may not be a genius, but she's no fool. If she wants to keep Ronni on the side of the angels, she has to work at it.

I love the silent reaction panels. The script called for:

Ronni looks back at Britomart, angry, ready for a retort.

That's exactly what we got, too. Hero points to Dirk Swann, the unsung hero, the everyman of this quest with right hands of gods and titans and warlocks and the spectre of death. he likely saves Ali Kazaam's life here... for the second time, as he did save Ali from the initial hill giant attack as well. The regular human guy with his three-necked lute definitely serves a purpose in this adventuring party. He'll also get his moment in the sun in upcoming pages, so keep an eye on our master bard.

Hope you are enjoying the story!

Ronni is NOT coping well with living in Imperial Urth for this storyline. She's been stuck here for a while already, Ali... her ONLY link to home... has rejected her, and the ever present threats she's dealing with are chipping away at her. As an artist, there was a HUGE challenge here to show all of this beginning to weigh very heavily upon her WITHOUT the benefit of dialogue from her for the last 4 panels. This page is all about showing Ronni's emotional state and foreshadows the building tension.

In these early pages, I was drawing her with REALLY big eyes. (For anyone familiar with my work, this is NOT uncommon for me, lol). As the pages progress, I think I am getting a better handle on drawing Ronni and the eyes will start getting better proportioned. That said, I'm still happy with her shifting expressions in those middle panels where she really WANTS to be angry at Britomart.

As Sabrina mentioned, using little Lexii as a sort of "Greek chorus" has been a lot of fun and a big help in using her to give a reader POV character to silently feel what a lot of us are feeling FOR Ronni.

Plus, I really do LOVE drawing her.

There are three members of the group absent in the last panel, and those are on purpose. Smoke is pyrophobic, and Flynna and Haldur have been growing closer in the background, but in less overt ways. If you aren't seeing them, it's likely they're together somewhere. ;)