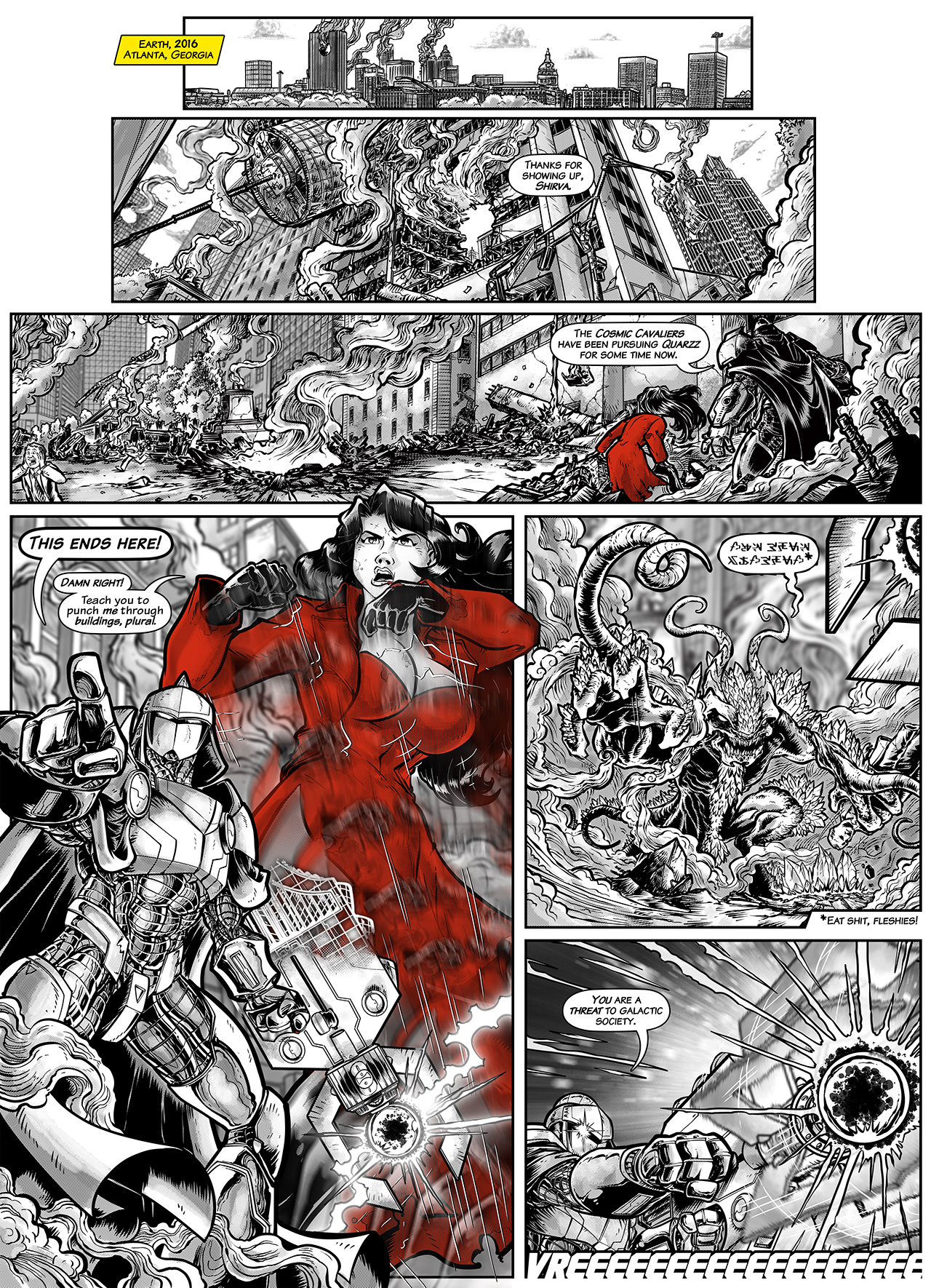 Always start in the middle

In this case, it’s clear that the battle with Quarzz has been occurring for at least a few minutes now. We certainly didn’t see it start, nor did we hear that call for help that brought backup, in the semblance of a shiny knight of the spaceways. We can see evidence of what a superheroic brawl in a major city looks like, that’s for sure. And at the heart of it, there’s our lady in red, doing her thing.

As this is going to be a cold opening for a lot of fans to be introduced to the character, we wanted to set her firmly in a superheroic combat, showcasing that when she gets involved in a conflict, it tends to get extremely hazardous for the local landscape. Holes in buildings, smoldering craters and broken infrastructure just seem to be her stock in trade. Because sometime in such worlds conflicts like that arise, and this is the kind of gal who fights such battles.

Until she realizes she’s in over her head, and calls someone else to deal with it for her. Minor detail, but still a telling one for her character.

Over the next few pages we’ll strive to bring a brand new reader up to speed on just who IS our titular character, this Giant Girl of whose adventures we are privy. We think you’ll find the introduction to be quite accurate… but as the existing fans, you tell us, eh?

What Sabrina said! If you thought this was going to JUST be a retread of what you already knew, think again! We are VERY excited to use this as an opportunity to tell a VERY complete intro to Ronni’s adventures.

Artistically, I really wanted this page to be like the opening of a BOND movie, with a ton of excitement to reel in readers. Ronni’s a superhero. Ronni’s… a smidge on the flippant side. Ronni is a weapon of mass destruction, even when she’s saving the day or fighting the bad guys. And that, of course, means I took a LITTLE longer to draw this page than normal, in order to properly wreck shop in downtown Atlanta.

Another cool part for me, is that this opening sequence is the first extended opportunity I’ve had to draw Ronni in her more classic get up, so that’s also a lot of fun.