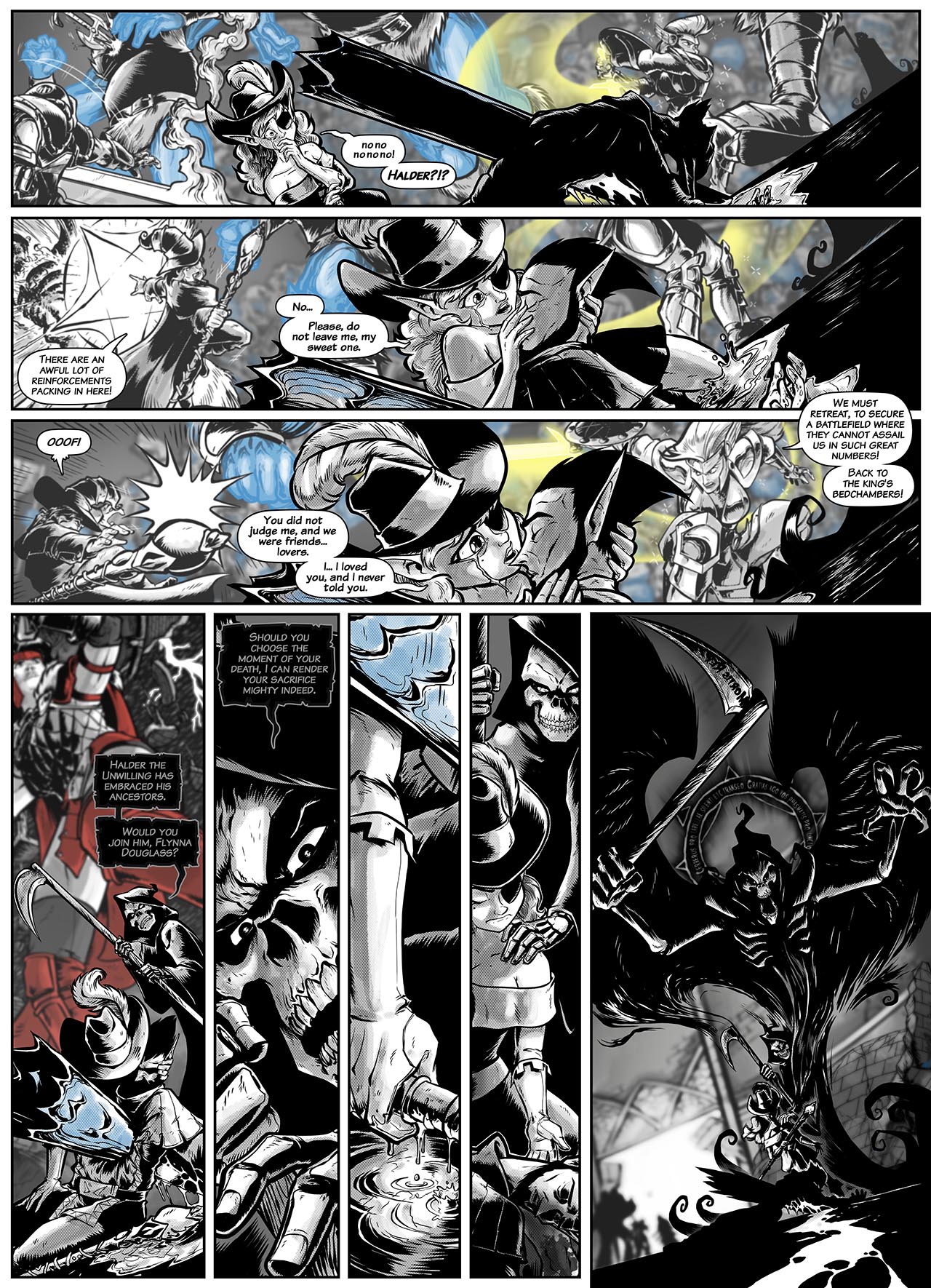 I don’t know if it is irony or poetic that Brunhilde’s ice spikes impaled our resident assassin, exactly as he himself murdered her husband mere moments ago.

One might say that she has achieved a measure of revenge for him, in this moment.

Not that Flynna would be inclined to agree.

This scene was long planned, as is the sequence that will follow, and I have to admit, I have been waiting for it for a VERY long time. This is a scene with (I hope) a lot of emotional weight to it. We played up their romance, pairing them off, even letting them bicker about about love and the nature of relationships. Because in the battle of the frost giant’s citadel, Halder was always destined to die.

Knowing that, Dee took every opportunity to keep them interacting, so that we weren’t just relying on their introduction to indicate their relationship was ongoing, we illustrated it. So that when you see Flynna’s heartbreak here, you believe it. She’s carrying his unborn child, as we are all keenly aware in this moment. But her heart is broken, and she plans to cure that in the manner of her sort of people- with revenge.

Karloff is using his priest special ability to ‘Snip The Thread’, wherein if you choose your moment, he can magnify the attacks you put forth. Which, as fate would have it, Ali Kazaam’s staff, the artifact of power, dropped practically in her hands.

Fate can be fickle or funny, depending on her whim.

Beyond all of that, I hope this is as dramatic and moving for you, the readers, as it was for us, the authors. The battle rages on, but the soundtrack sure is getting dramatic and loud…

Controlled chaos has very much been the name of the game artistically with this scene. With each main battle getting a little more serious each time, this is a sequence I have been DYING to get to. (See what I did there.)

It’s been a massive challenge to not only show the powerful emotions with poor Flynna here, but also to show that there’s a whirlwind of intense action still happening all around her. Selective blurring, working at the composition and the toning helps keep the attention focused while also letting everyone else have their moments. The work is intense, but I hope that it pays off for a truly epic scene.