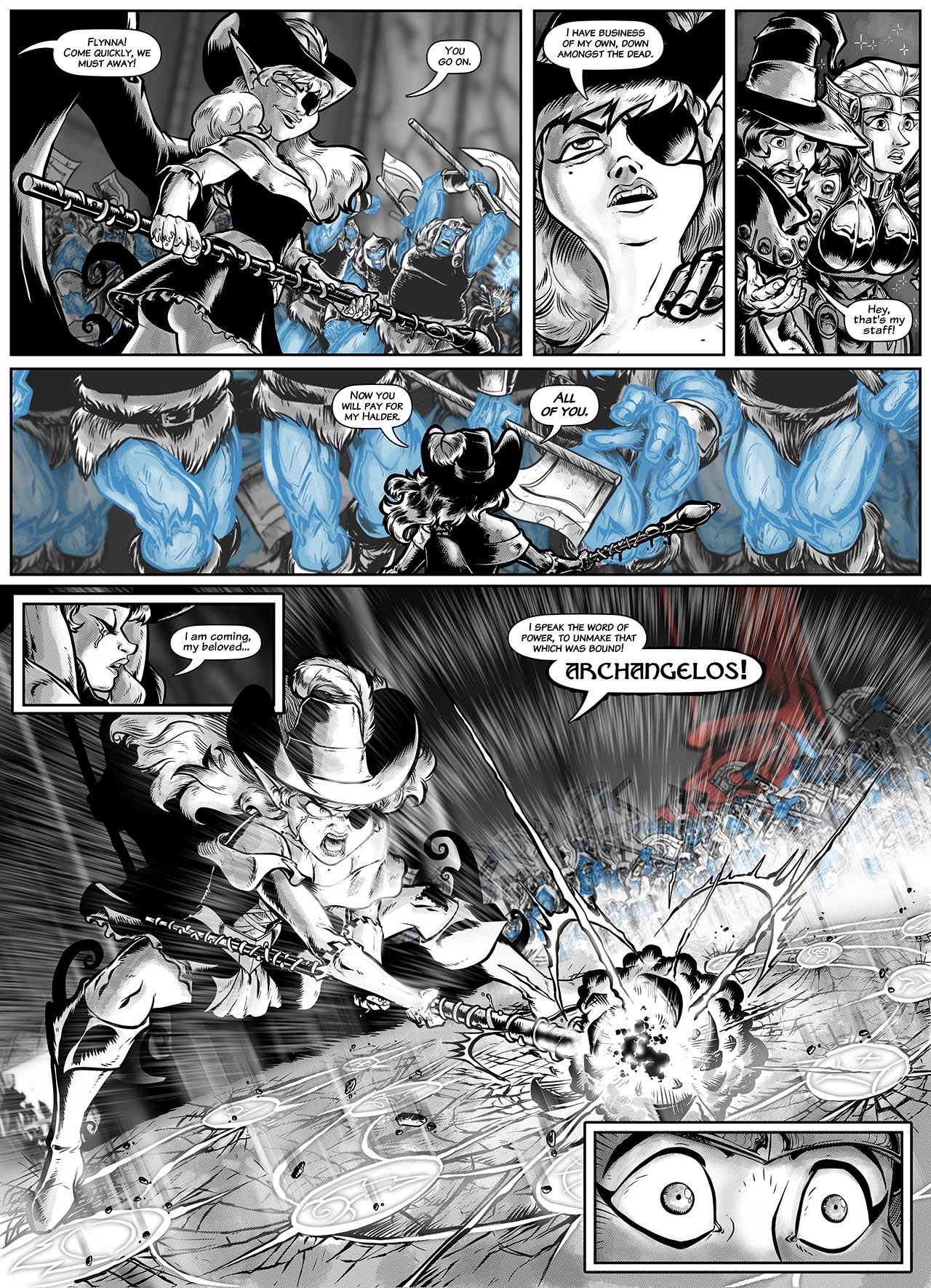 Down amongst the dead

Our resident devil-may-care swashbuckler got an offer she couldn’t refuse, and with a stolen staff- a thief to the last- Flynna enacts one of those often talked about and seldom seen breaking of staves, particularly those of power.

I love that, once again, Ali is off to one side muttering something about himself as a women carries his weight.

Anyone who has played a fantasy RPG has certainly encountered the trope. And it tends to be more disappointing than badass, honestly. Few can claim to have survived it, but mostly because few (other than particularly angry or vengeful NPCs) ever try it, because of the risk/reward ratio.

Flynna don’t care. She’s very, very angry and very, very sad, and she’s going to do something very extreme. Because that’s Flynna. That grin is still there, but the eyes are dead and hollow.

As Karloff indicated with his big angel of death last page, he’s gonna make this some serious explosion, as she’s choosing her moment. But some of you still might have a question. If you watch on page 101, Ali lost his staff when a giant punched him out of the air. You can even see the maker’s mark, the rune of Archangelos, which Swann mentioned back in his report to the Overlord  way back on page 48.

The Duke Serendon Archangelos, Lord of the Living Flame. A clever and inventive archmage, who had a long and storied career crafting and enchanting artifacts of power. One of the great archmages of the Urth, a little known fact is that he is, paradoxically, also it’s greatest villain in the bleeding skeletal form of the Heart of Blood, the name he chose when he embraced undeath. After which he was cast back in time to shape the heroes of the age of man, and bring about the age of chaos, then cold undeath to all the Urth. As Britomart mentioned is writ in the Book of Vanu, back on page 23.

I’m bringing together threads here, so I figure many as well spell it all out, right?

The breaking of the stone floor and the sigils representing powers of the staff were all Dee, and I asked for Akira radiation and some antigravity stones, and she gave me all this. It was work to get Karloff worked into the shots- in panel 4, he is literally the camera POV- but I absolutely adore his inky shadow presence as Flynna breaks the staff. Calling out the name of the creator as she does so, which happens to be the name of the artifact, which you need to know to access such a power.

As mentioned, the Duke Archangelos was quite the crafter, and something of an egotist. The easiest way to insure he could always use his own items was a simple universal password, as it were. Being from the Wizard’s Isle, Flynna is an accomplished scholar, is familiar with the lore of the man himself, and is familiar enough with the artifact by legend to work out it’s operation. Just in case anyone was going to ask. Because I know some of you pay attention to such things.

There have been quite a few benchmark moments throughout this process for me. This sequence is certainly one I’ve waited a long time to see- heck, I wrote the script back in 2014? Through really amazing teamwork, Dee and I have brought the story this far, and this is a moment I have been dying to share with you as a creator. So thanks for this one, Dee. Here’s to a great artistic partner, and to making splosions together.

As an artist, I have been dying to get to this sequence and this PAGE in specific. I’ve had the image of Flynna smashing the staff in my head for MONTHS and this is fairly close to how I pictured it. Or, at least as close as ANY of my art gets to what I’m seeing in my head.

For me, this page is all about the expressions and that was a huge part of my focus here. Like Sabrina mentioned, the combo of the devil-may-care smirk with the lifeless eyes was as difficult to draw as it was legitimately heartbreaking from a creative standpoint.

Ali’s self-centered surprise and Britomart’s look of pure empathy were things I needed to discover in the art process, but were really important to get right as well. The way I saw it, Brit’s an avatar of light and life, and what she’s seeing about to happen is an emotional hit for her on some level.

When you evoke legit emotions in the creative process, that’s generally a cue that something’s going right, so hopefully you will all agree.