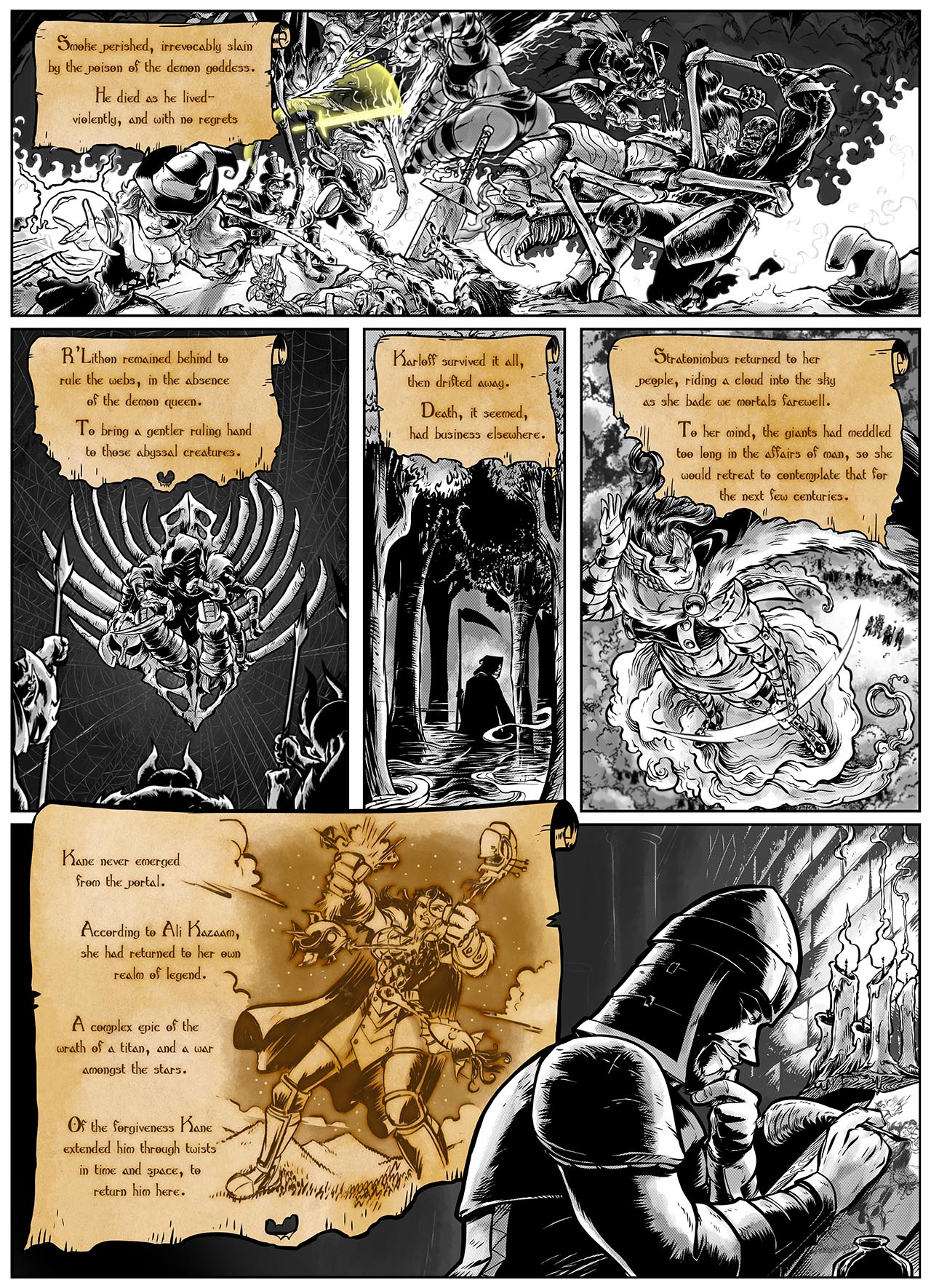 You didn’t think we were just going to walk away from the Urth storyline and characters, and just leave you hanging, did you?

But have no fear! We were determined to bring some closure to the Urth characters, some more than others. And yes, I know, Ali Kazaam is here, while, paradoxically, he is locked in his mother’s pocket dimension. Ronni wasn’t the only one who can do the impossible, and at a point in the future, now you know there will be a reconciliation. When that comes to pass, Ali will be sent back to finish his journey through the portal, to catch back up with the party and aid them in their darkest hour. Now you know. You don’t know how (and it won’t come out for quite some time, given our publishing schedule), but you will note his outfit is a bit different, and that holds some small clue in and of itself.

Not like the Witch knew what she was doing all along as she moved people around like pieces on a chessboard. Lord Duncan called for the giants to be ‘humbled at the feet of mankind, so they would never rise up thusly again’. As Stratonimbus leaves the realm of man, the giants become myths and legends, instead of the scourge of humanity. Much like the goblins, who will never again threaten the humans of Urth in the numbers they once commanded.

Kane the Titan changed the landscape of the magical realm, paving the way for humanity to flourish. As if that was a certain someone’s plan all along.

In his record, Swann relays to us a tale told to him by Ali Kazaam, which makes him something of an unreliable narrator. I love the fantasy versions of starships his mind conceived. An Upshots Award to anyone who recognizes Kane’s somewhat clunky pose as the homage from an iconic 80’s comic cover.

Yes yes, we know, not enough Lexii the Pixie. Patience…

I mean, while the last few months have been all Ronni and Stanley for me, the MAJORITY of my time on the title has been, in essence, a team book featuring these characters. It was really good to get a smidge more time with them in this fun little denouement to our adventure.

From an artistic standpoint, this page was both a lot of fun and a lot of work sussing out how to get SO much info into just one page. Particularly that top panel that would be, for most other comics, a double page spread all on it’s own. But GIANT GIRL ADVENTURES isn’t most other comics. 😉