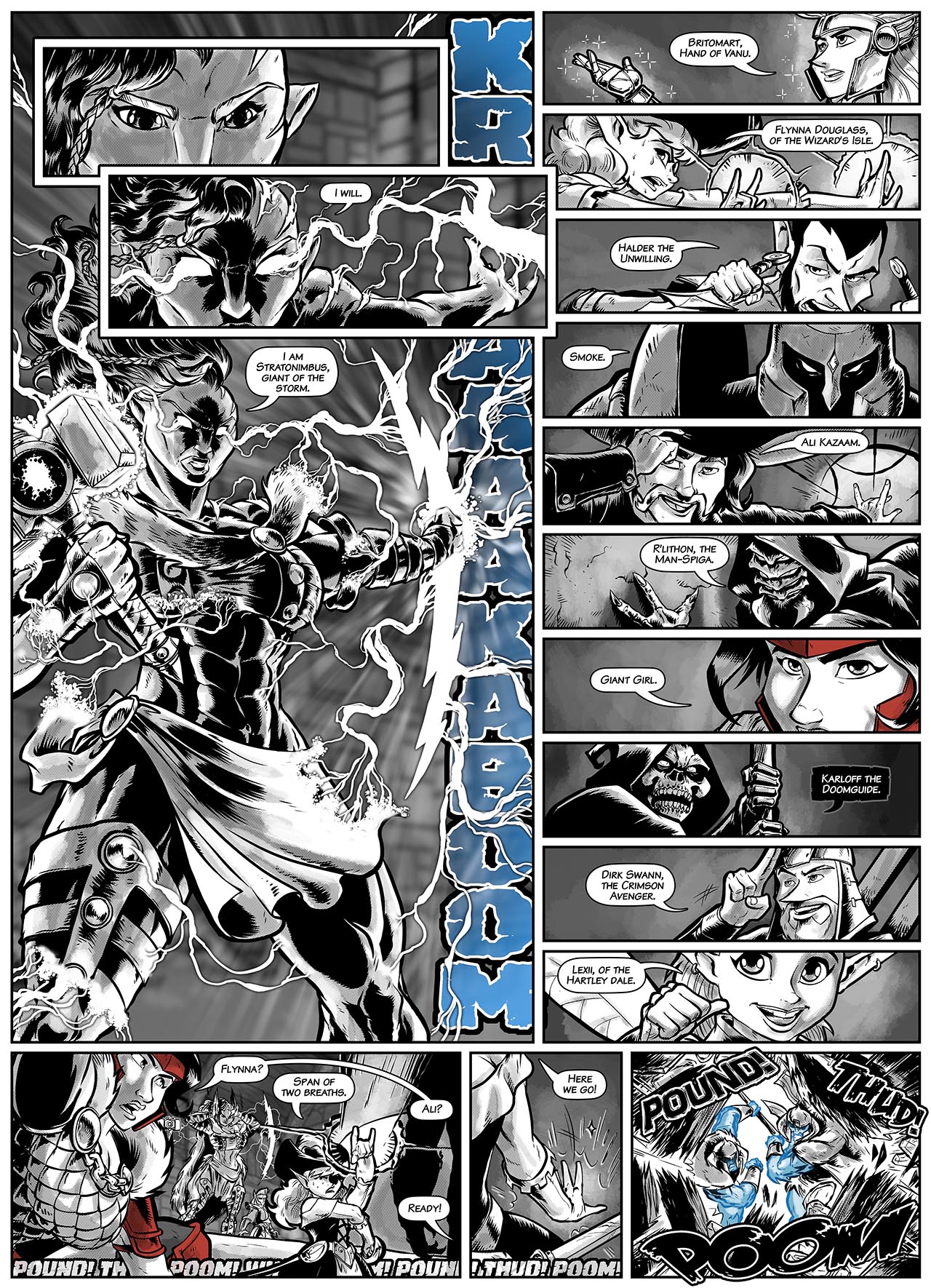 This is one of those moments where the fact that it is a serialized webcomic doesn’t serve us as well. Because you need to ride off the question of the previous page to properly appreciate the answer on this page.

So you may ask yourself, who is this powerful giant of the storm? And you may say to yourself, how did they capture her? You may ask yourself, if they had her as a mind controlled captive, surely they could find a better use for her than harem girl? You may say to yourself that even if they managed to slip her an ingested poison that worked on her and drugged her to a state they could control her, surely the frost giant king wouldn’t just try to throw her in as a side dish while he was cheating on his queen.

Letting the days go by, let the water hold me down

Long story short, Stratonimbus is in, manifesting her armor and summoning her weapons, even as she retrieves her helm, which the Jarl had appropriated and was hanging on his bedpost. We get a roll call of the characters, everyone taking a second to introduce themselves. Partially because it’s been maybe 70 odd pages since they were introduced in many cases.

It’s a page with 16 panels, but I love it. Stratonimbus looks magnificent for her big intro, everyone else takes a character beat, we get a little bit of Flynna casting. She is the only wizard on the quest, after all. Ali Kazaam is a witch, a different breed of spellcaster altogether, as Swann observed in his report to the Overlord. Thus a surprising amount of the spellcasting ‘heavy lifting’ falls on her shoulders. Love how Dee is working the sound effects into the art, making it an interactive part of the panel rather than a passive obstruction for the artwork.

Enter the giants, and the battle is joined… maybe.

Incorporating the sound effects has been a learning curve for me. I letter the pages and know HOW to do sound effects, but in my own work, have tended to forgo them. In this project, they are really tonally appropriate and fitting. The integration has been something Sabrina and I worked out together and putting some effects BEHIND the characters has really helped make them feel less obtrusive.

As for this being a SIXTEEN panel page, that is MY fault and I regret nothing. In the script, the scene called for a group shot of everyone saying their names but I realized it would be a design issue with everyone still scattered around a fairly large space. Plus, there are wildly different SCALES that would have had specks introducing themselves in the case of Lexii or R’lthon, who was furthest from the group on the actual wall.

I recommended the idea of the sliver panels that would allow us to not only show their expressions and personalities, but also to maintain the order of introductions as Sabrina had written them.

And, not to pat myself too hard on the back, but I really feel like this page has a lot of dynamism and energy and doesn’t FEEL like a sixteen panel page at all.