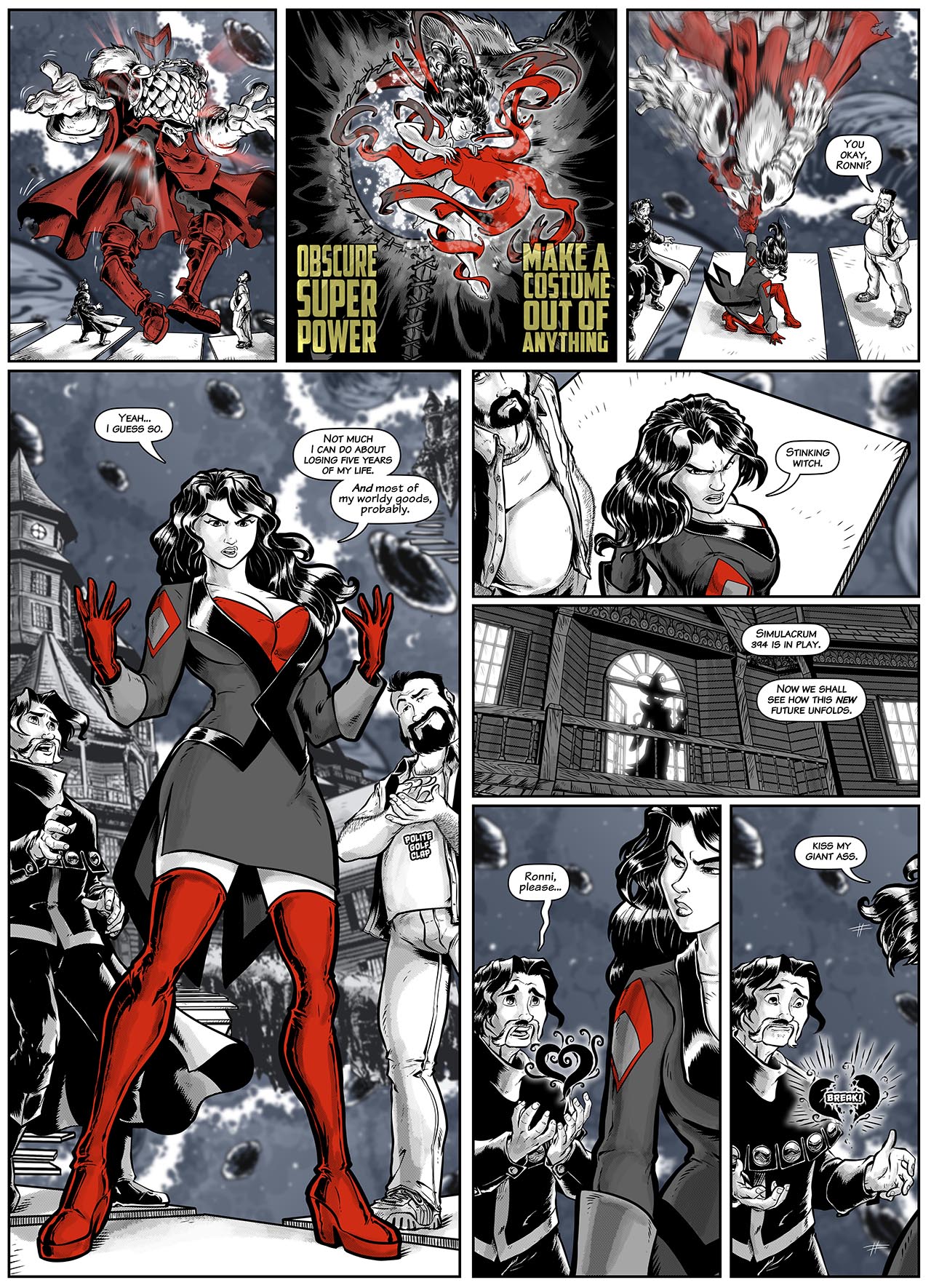 We had always planned to debut Giant Girl’s new costume at the and of the adventure, and here it is!

Having matured and perhaps battle-hardened a bit from her time on Urth, Ronni’s new look incorporates the grey of her fantasy outfit with her classic red, swapping a few colors and shedding her Carmen Sandiego comparisons once and for all. Not that you won’t still see the OG costume in flashbacks, but moving forward, she is striking out to make a change.

I love the effects. Dee REALLY bought it home with this, and I’ma let her discuss that.

Oh yes, the witch has plans. I mean, for a powerful sorceress in her seat of power she really didn’t put up much resistance to Ronni’s rant, nor her judgment. So clearly she’s already embraced this change and is making the most of it. What that means for our heroine, time will tell.

Last but not least, Ali makes that one last desperate attempt to use his magicks to charm Ronni, offering her his black heart. We went back and forth on whether that should be a silent panel or not, but in the end, the sarcastic rejoinder was just too in character for our Giant Girl.

The special effects, like most of the growing and shrinking, was handled in Photoshop after the actual drawing, coloring and toning were done to make it more of a seamless part of the page. I largely only draw the stages of her growth individually if she is moving in process, which she rarely is due to the speed at which she transforms.

Here, it is all about selling the moment, and elaborating on what I had visually established, when she first used that costume power on page 81. Adding a little more cosmic magic to give it a classic, “magical girl transformation” feeling, while maintaining the look of the material rippling around her like it did in that flashback.

Artistically, I also took advantage of this moment to hide a little tweak to my style with Ronni’s HAIR, which is a little more rendered and detailed after her costume reveal. I like using in-story moments to mask art changes whenever possible.

Also, I’m kind of giddy that I was able to incorporate something of a “superhero” symbol into the shoulders of the jacket there, with the diamonds overlapping with different shapes. Simple and graphic, but meant to look like both a bit of flourish to the coat and also be a subtle symbol that shows her embracing more of a superhero aesthetic.

She’s still Ronni, and her personality is all over this, but it IS a bit more of a serious outfit in some ways. It means just 10% more business, I think!

At the $10 tier on Patreon, we promote a live stream session of Dee drawing the comic. Basically, it’s getting a peek into how we create the comic, looking over her shoulder in Discord. So, this upcoming Thursday, February 24th we’ll be broadcasting it on our Discord server! We look forward to seeing any of you who are interested in seeing how the giant story gets told.

Here’s a link, which should be open to anyone. Giant Girl Adventures Discord