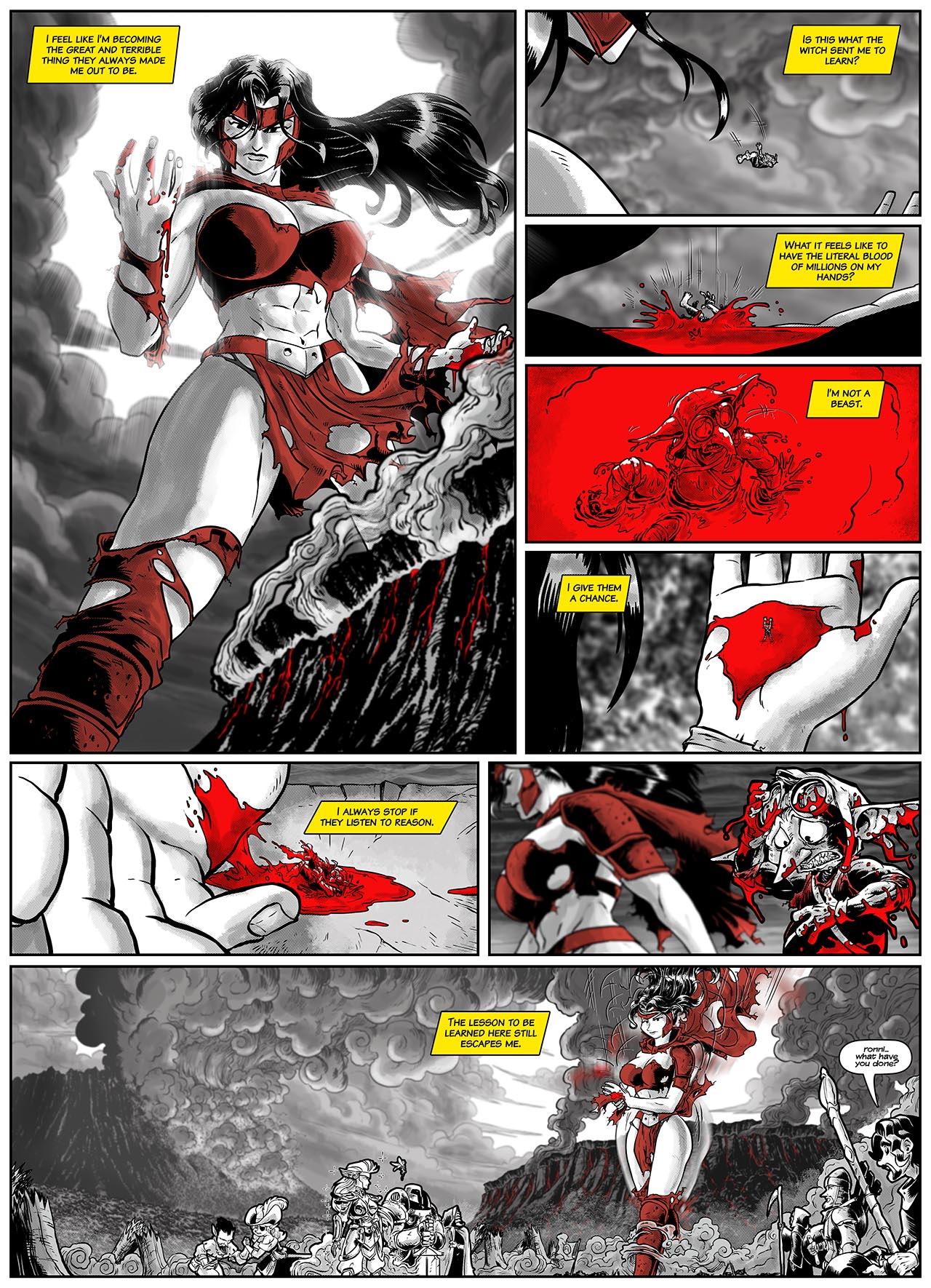 Buff Ronni, destroyer of civilizations. I mean, they didn't really have art or music or really much of a civilization, but what they had ain't no more. The Goblins are not wiped out entirely, but they are definitely no longer a threat to all sentient life on Urth.

Goober rode out the end of his people with a view like no other, and he ends his odyssey splashing to safety in the blood of his people while Ronni is taking a contemplative moment. As she's shrinking, she's making him just a bit bigger. Goober the Goblin Hero will live a long and very interesting life. He rode the Titan's hair through the battle, and was bathed in the blood of her victims. His legend will be mighty and long.

Look back at most of her battles, she always tries to de-escalate. In this case, Goober made it clear he wasn't planning to try to gnaw her pinkie off, so she spares him. The goblins on the whole are the driving force behind all of the battles she’s been in recently, and are, as she mentioned, murderous, poisonous and foul.

Even if Dee can make them look cuddly.

I know this is a bit of a darker turn character-wise for Giant Girl Adventures. It’s not quite the happy go lucky wisecrack strip we’ve done before, and this is pretty dark, I’ll admit. It’s not the first violence and casualties we’ve shown- Badonkasaurus battled Ronni in Tokyo, resulting in the deaths of hundreds of thousands. Beverly Hills lost hundreds when Giant Girl exploded out from under Satan’s School for Girls. The difference here is that our heroine is acting deliberately. This is not her protesting a fight she can’t evade or a circumstance that has her trapped. She chose to do this of her own free will, and she’s made the choice very deliberately.

Point being, as this is a grimmer turn, I ask that you stick with us. This is a journey, and this was a big step, but still just a step. Stay with us, and don’t give up on the big girl just yet.

There's a lot going on, artistically in this page. The selective blurring to help show scale is back to really emphasize how big Ronni is, and I decided on a lighter shade of red for the blood so it wouldn't blend in with Ronni's red.

In the last page, the shockwave from her slamming down the mountaintop like a plug actually pushed through the clouds directly above her, which let us bring the sun back into the scene as the action slows.

There's also another little thing I did with this sequence, which was use it to slowly morph the way I actually draw Ronni herself. Specifically, her eyes, which shrunk down a bit from the earlier pages where I was still finding how I wanted to draw her.