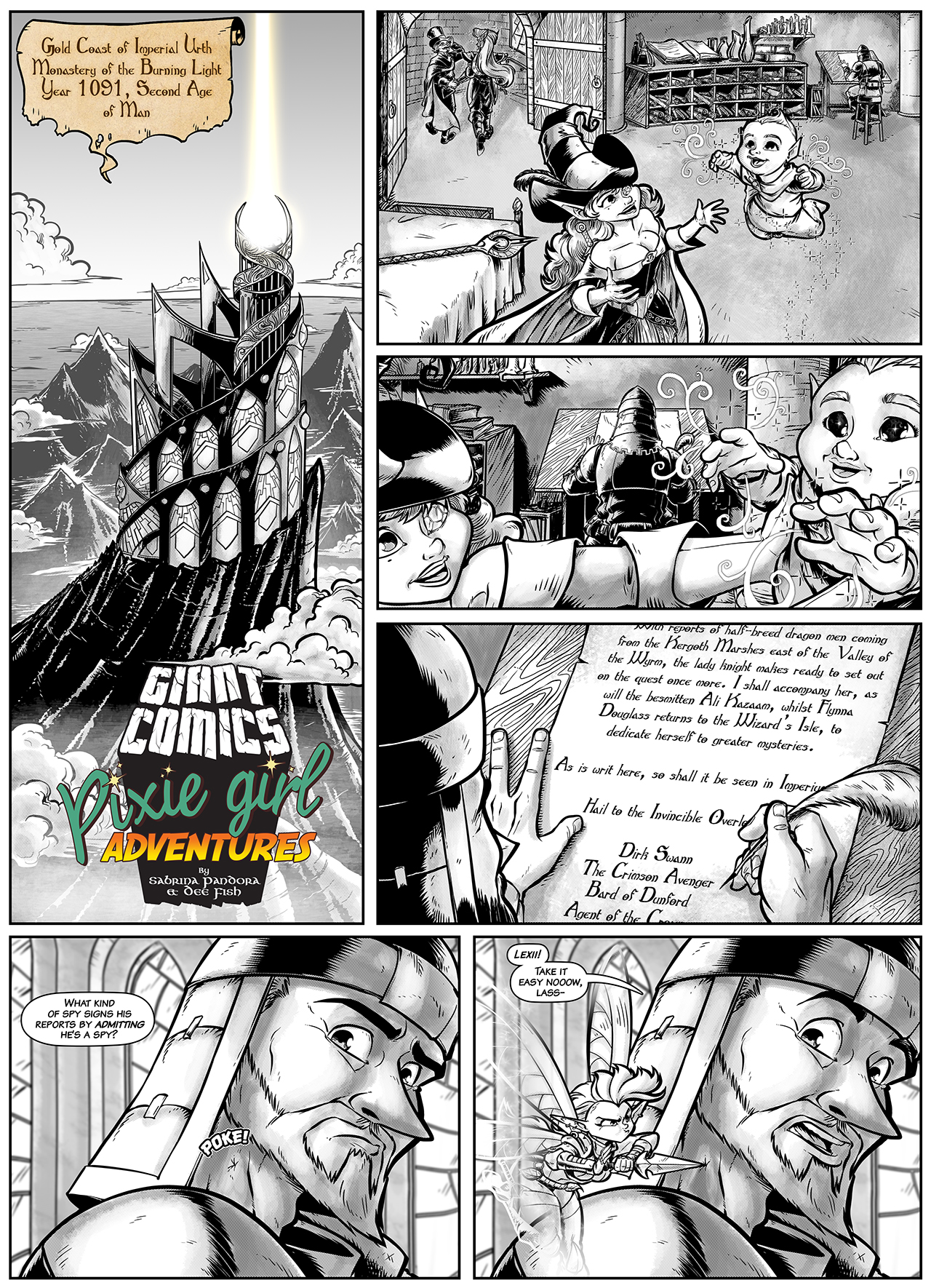 As Lexii was entirely too popular a character, we couldn’t just leave her story untold, and leave our fans hanging for years on end. After all, we like her too, and while we produce high-quality pages, stories take a while to be told at a page a week. So, without further ado, let’s turn Giant Girl Adventures over to our resident mischievous pixie, who’s finished helping the party and survived the battle with the queen of the abyss. Thus we return to that shining beacon on the tallest peak, the Monastery of the Burning Light, where Vanu’s power on Urth is strongest.

We see Britomart and Ali Kazaam, hand in hand. Clearly their relationship has progressed from when we last saw them, and little Elspeth Chesterfield is quite likely to come about (as she showed Ali in a vision back in Issue 17, page 114). Almost like what appeared to be the Witch’s backup plan is right on track- a marriage of the light and shadows, the spawn of a god’s avatar and her own uniquely powerful bloodline of witches and warlocks.

Meanwhile, speaking of powerful children, our wee Jhor’dhunn, blessed by the gods, favored by the fae and child of one of the greatest sorceresses of the age, can already fly. Which obviously delights said sorceress, as Flynna is clearly unconcerned for his safety as the infant masters movement in three dimensions. This is the advanced version of our gal Flynna, as you can see her swashbuckling outfit has become a bit more regal and dignified. She’s still got Ali’s stolen hat, with her fancy feather quill tucked into it, and we can gather Ali didn’t mind. Over her shoulder is one of Halder’s blades, recovered from the ruins of the Citadel of Frost, while her eyepatch has been replaced by a gemstone, likely one that grants her Sight Beyond Sight. Her fancy sorceress staff is there on the bed, and even the clasp on her bosom is the eye of Vanu.

It would seem Flynna’s matured a bit since last we saw her. But then, she’s been through a lot.

As the camera angle is Lexii winging her way into the room, we can see that baby Jhor’dhunn can clearly see the invisible fairy. Because Magic Baby.

Lexii settles in next to Dirk Swann, our resident bard and spy for His Majesty’s Secret Service, with her sword at the ready, poking him in a vein he’d prefer not perforated. Because the invisible pixie knows how to get someone’s attention. And really, she does have a point- who signs their reports admitting they are a spy?

By the way, we are doing some much-needed Maintenance on the site. So if something is a little wonky, feel free to tell us about it. Meanwhile, pardon our dust while we work some stuff out!

That camera angle being a downward shot was my idea. We really could have used the already existing establishing shot, but I wanted ALL of the approaching shots from a kind of invisible, Pixie-eye-view, as if we were following Lexii in.

We put a lot of thought into Flynna’s redesign, so I’m glad to have had the chance to showcase it here, which was a lot of fun to work out.