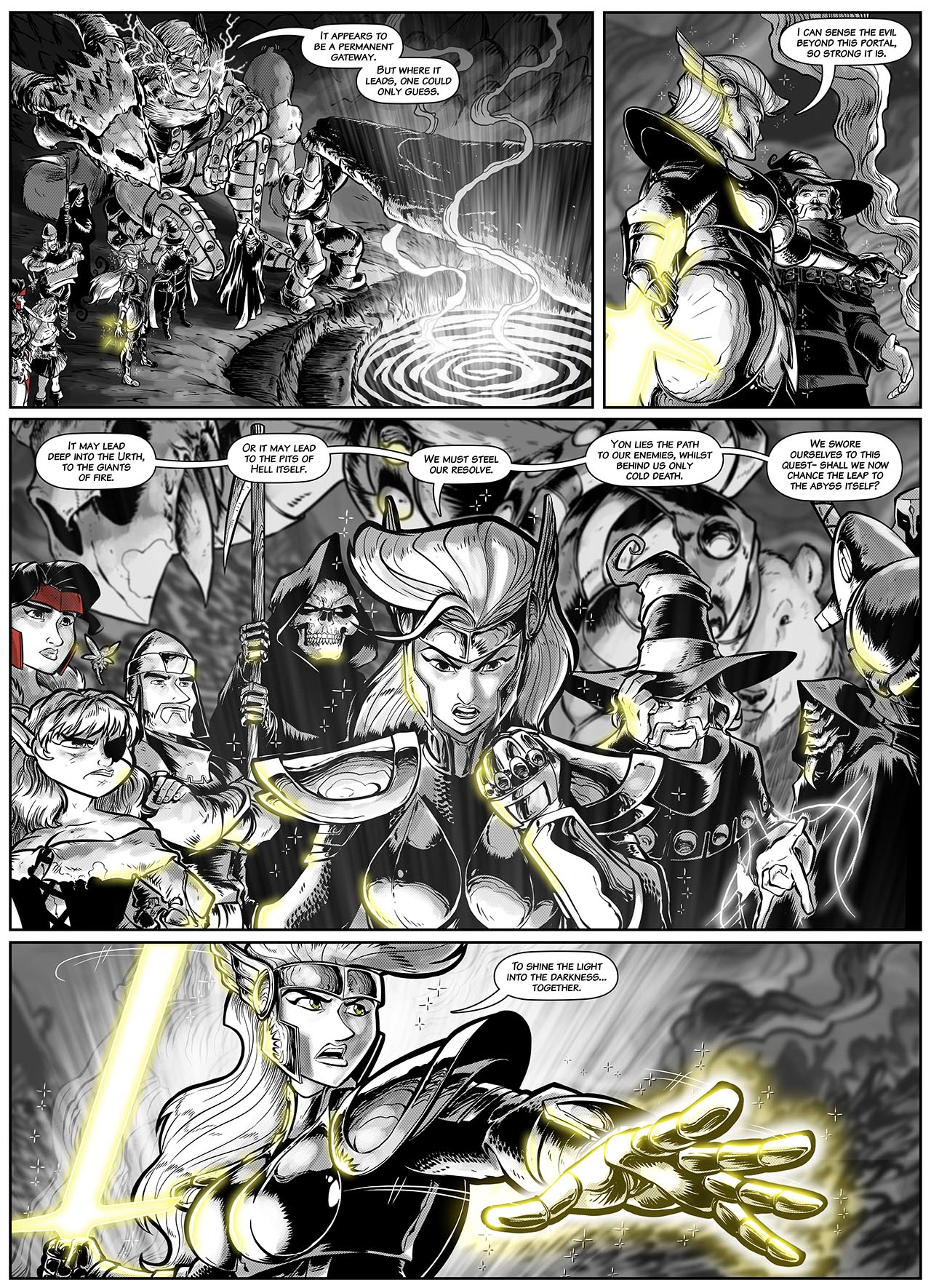 Heroic speeches are the bread and butter of paladins. It’s why they need that high charisma- so they can inspire those around them. In this sequence, we see Britomart lay out the situation, call for action, guilt them about the quest a teensy bit, then asks- nay, invites the party to accompany her. We take the pan of everyone’s jaw setting as the speech has the desired effect, and really, it all comes together so well.

I’ve given Britomart a few pages to shine through this story, but this one is a big moment. Because through it all, she’s learned not to be unyielding and demanding, but to work with others. Which is why her call to arms here is a question and not an order.

When one cannot rein in chaos, one must adapt. Book of Char-jha, 12:8

I’m pleased with the progress she’s made as a character through this story. And I am damned fortunate that Dee enjoys drawing her design.

To her credit, that premonition Britomart had back on page 53? Spot on. Bringing the mounts would only have gotten them all killed, and they are definitely not passing that way again. I mean, plot, but still. You wouldn’t have wanted to see them falling in the ice cave trap, or in the battle, or the attendant explosion. Vanu is merciful, after all, and gave her a little tip-off.

We’ve debated the one-page story of Buttercup’s heroic mission to get the other two horses to safety after somebody threw a giant snowball full of trolls and wendigoes and ice apes and who knows what down the mountain in their direction. It probably won’t happen, but it is a funny idea.

This page was an interesting compositional challenge. Not only does it had two main shots where everyone is shown, but in the script, the way we show them all was not specified. Originally, there was no indication of what we see in panel 3, as the script centered on just Britomart making her speech.

Talking it over, we discussed making a series of shots showing each of our heroes reacting to the call to action, and as I began laying it out, it ended up working far better as one, long panel across the scene. This is frequently how things evolve in the process and we often end up with a stronger dynamic for it.

Also, Ronni is positioned her very specifically to show as little of her red as is possible and that is on purpose.