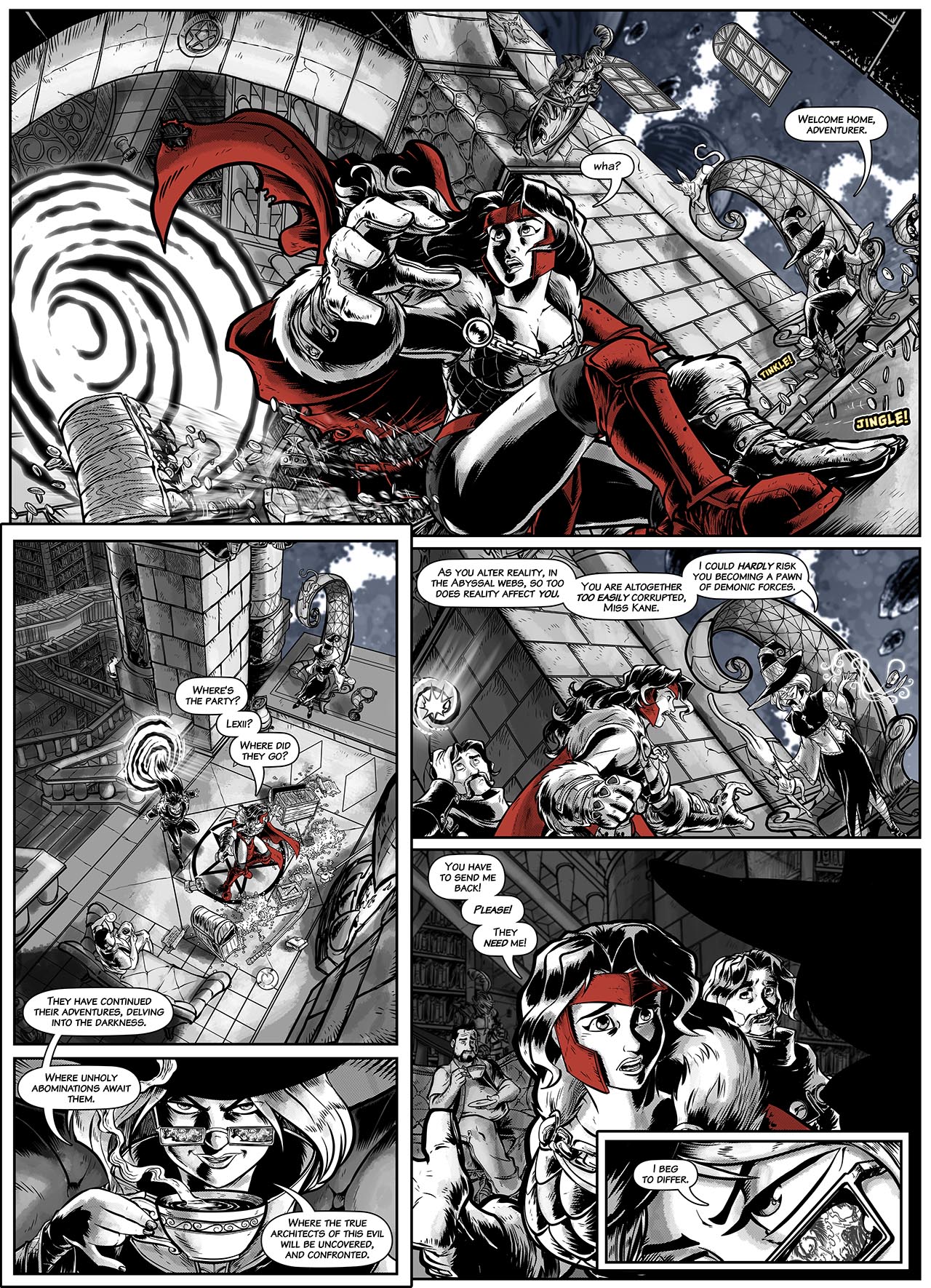 While I asked for an individual take on the design, this otherworldly parlour was all from Koen’s fertile imagination, and it’s still perfect. I love Dee’s art, but Koen will always get production design credit for this issue. Because it was distinctive and brilliant, and it informs everything we do.

Now, honestly, this is just plain mean on the part of the Witch. If we assume the know-it-all diviner witch (of a coven unknown to Dirk Swann, as he reported to the Overlord) has been watching, she knows this was Ronni really committing. Dedicating herself to something, to someone other than herself. It’s not the entire hero’s journey, but it’s a step.

Which is precisely the moment the Witch pulls her home, forcing Ronni to abandon the friends to whom she just committed herself.

To be fair, she explains precisely why she pulled Ronni out. Succinctly.

That look sells that plead in panel 5. Ronni’s not too proud to beg, and she pleads with the witch to send her back. That’s what matters to her- not being free of doing the witch’s bidding, not the literal treasures at her feet. Her friends, who have faced life and death together.

The gauntlets of power are swell as the big hands gloves, and I have loved their stint as part of the costume. That’s another thing Koen always tried to sell me on- that her costume should be more fluid. We’re going to adopt that as well, because it’s pretty easy to tell who she is- there’s always that red to look for, after all.

Everybody see the reflections in the witch’s glasses? We’ll post a close up in the comments..

Ronni with the superhero landing for the win! This page was a LOT of work in adapting what Koen had originally designed for both Ali’s mom, Morgan, AND the parlor of Witching Hill. The design was all great, but I needed to figure out how I would interpret it to fit with my own style.

Plus, I did NOT choose easy camera angles, to be sure. It was also fun to FINALLY start drawing Stanley. Ronni has a lot of emotions on her face here and I love exploring her evolving emotional awareness in this arc. She has really matured in a lot of ways, and it was important to emphasis, above all else, that she DID commit to the quest BECAUSE she has grown to care about the others.

Note she has all the riches she’s been collecting all adventure at her feet, and hasn’t looked down at it once. She is FAR more worried about her friends, and I wanted to emphasize that.