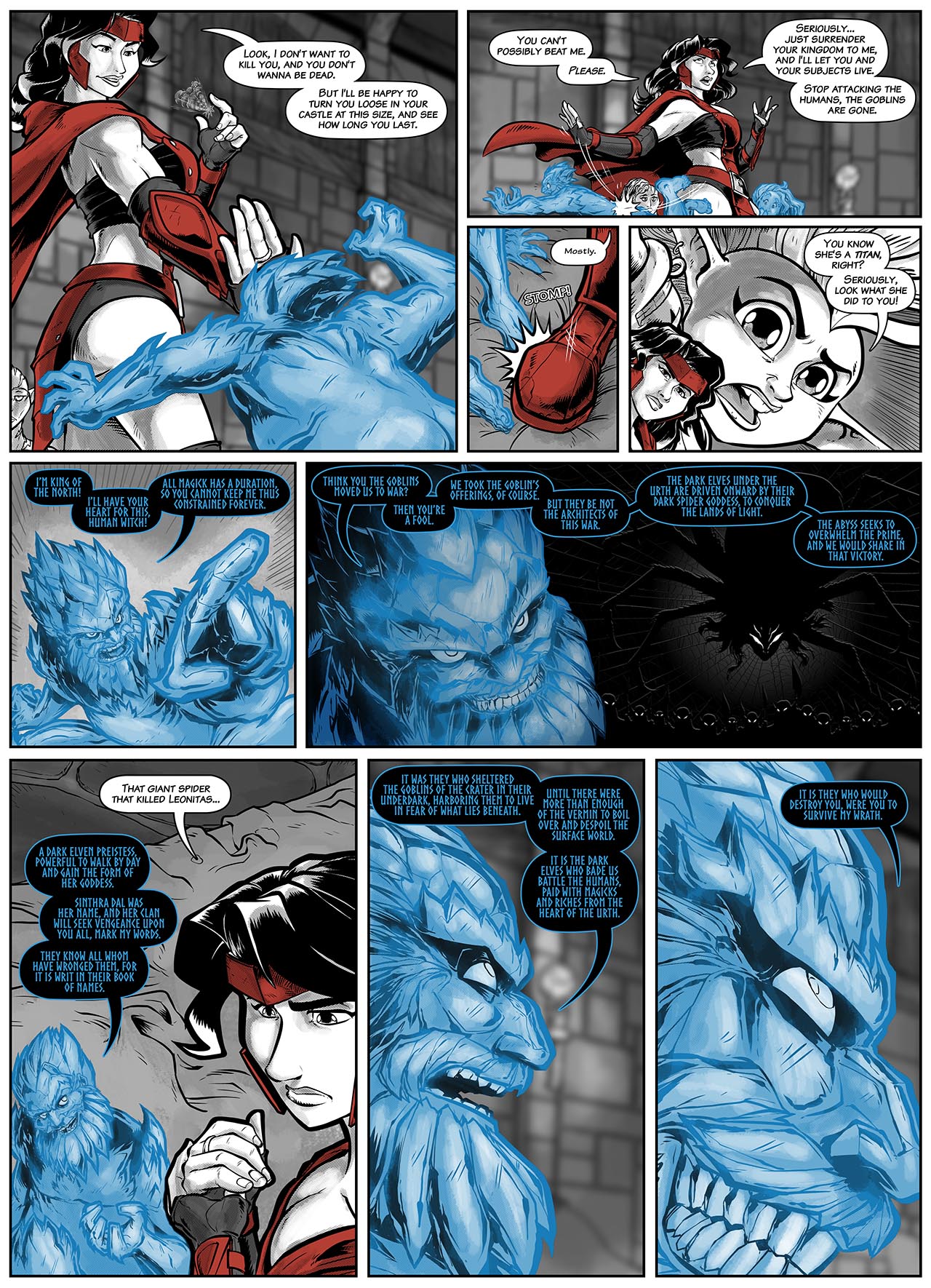 King of the North

Once again we revisit the pattern- Ronni takes control of the situation and appeals to her opponent to surrender. Opponent is unreasonable, not believing the upper hand she has over them. How will it end? Well, there is a pattern…

Watch how Ronni works to keep in contact with all of her shrunken victims, so she can keep them that way. She makes a daring move with that slap on the bum-bum, but then she stomps on that foot to keep him pinned in place. She’s a smart girl, our Kane. The polar bear gets shrunk down to seeming nothingness- we’ll get back to him, have no fear.

Point being, she appeals, and the frost giant king- whose name is coming, trust me, as he is one of our Patron supporters- explains a lot of the backstory of this war, and points to the true architects of this war. As the Witch pointed out on Page 4 of this issue, ‘It’s all part of a much larger war, which is in itself a much larger affair of forces of light and darkness opposing one another as per usual.”

She didn’t bore with the details, but the Jarl here surely will be happy to do so. Even Lexii pitches in on this one, as the Unlikely Voice of Common Sense once more, and you can see the Jarl is not taking this seriously at all. He’s gonna get out of this and kill them all. He’s sure of it, and him relating what’s really going on here is because he thinks he’s got the upper hand, and he’s gonna win.

Even tiny, he’s still a menacing and foreboding figure, and I love that Dee managed to portray him as such. The dark spider goddess (She Who Shall Not Be Named) appears just as shadowy and sinister as I requested, and with one very extra page of exposition he manages to bring us all up to speed on the war and just what sort of forces are involved. Even as Kane eyes the ring from her dead lover’s hand, which she’s still wearing.

I know, I went on a bit this time. But I really love this page.

Keeping track of the players here on the bed was a fun challenge that I enjoyed, as was drawing Lexii SOOOO much bigger than Ronni.

The Jarl here is a TON of fun to draw and I do love getting to cut loose on great, pure evil baddies from time to time.