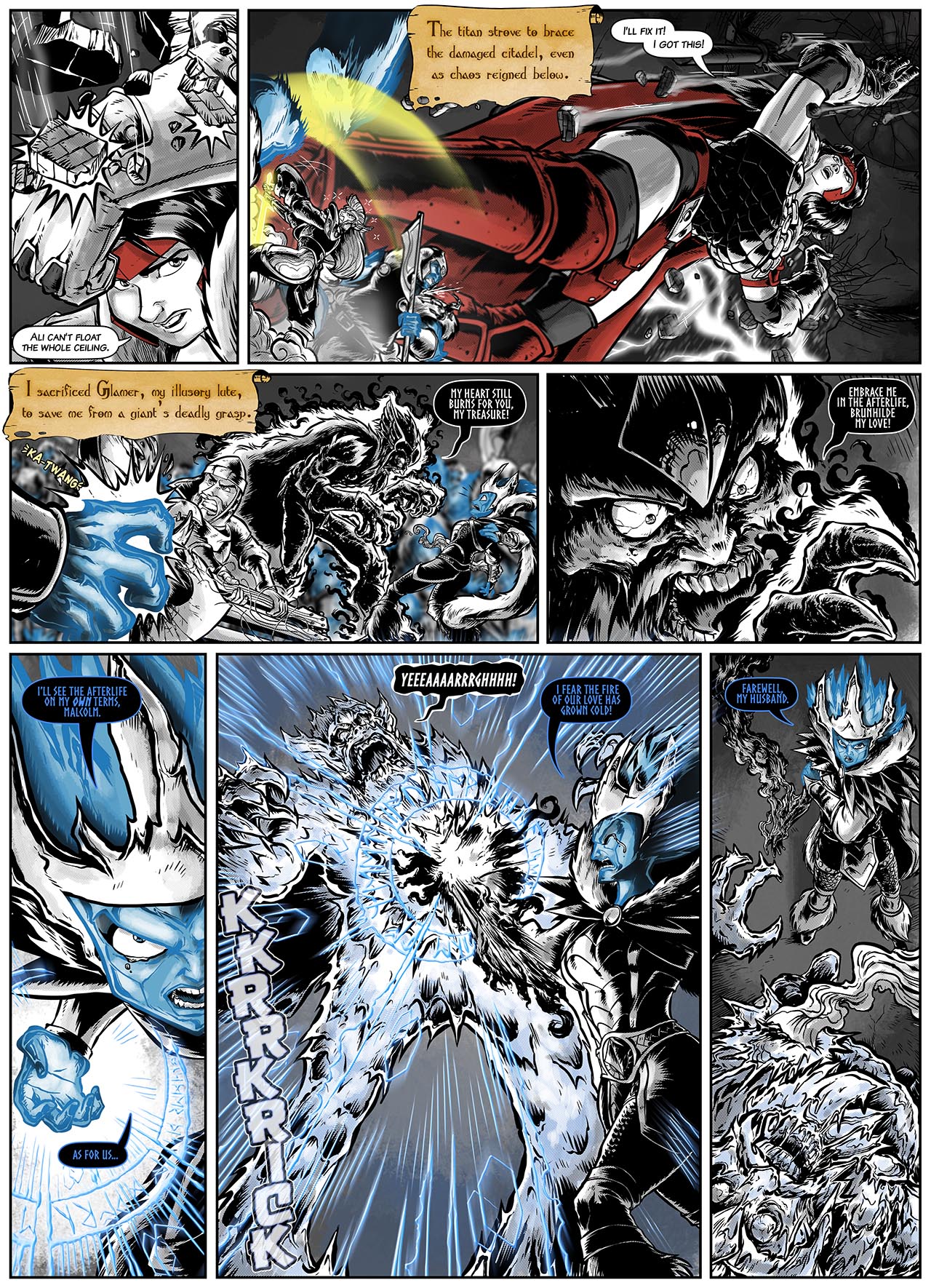 Consider this a divorce

… is what those runes around Queen Brunhilde’s hand say, for the record.

Okay, so it’s cool, Ronni getting gigantic to try to Atlas the ceiling and protect the party. And Dee nailed the big impressive shot. I asked for Swann’s narration to be ‘hung’ on the panel borders, and we might go back and institute that across previous pages, because as it breaks the panel bnorders, so too does it break the narrative flow, taking us out of the moment and viewing it from a past tense, indicating that Swann might just survive all of this.

Here’s to the everyman.

But the real story here is Wraith Jarl Magnusson coming for his bride. I wanted his ‘unfinished business on this plane’ to be his possessiveness of her- the woman who was clearly too good for him. Whom we literally introduced to readers while he was in the middle of cheating on his wife- with another lady frost giant (that clearly looks nothing like Dee) and the captive mind-controlled storm giantess. Reanimated as a spectre (as opposed to the sparkling twinkling blue effect of Karloff’s previous raising of spirits from the dead), he plans to drag her to Jötunheimr with him.

Having to destroy your husband, because he came back from the dead as a wraith intent on dragging your soul to hell, really makes for a bad day. As you can see, shoving her arm into his chest has desiccated and withered her arm. Grim, eh?

Also? For those of you who felt that Dirk’s lute couldn’t exist, as a 3-necked instrument with one acoustic hole, now you know- it was a an enchanted lute that projected a simple audible illusion.

The drama between the Jarl and the Queen is playing out here amidst all the chaos of the battle, showcasing that these are all real LIVES in play. These two CLEARLY had some serious problems waaaay before our girl and her group showed up to literally wreck shop. I enjoyed giving her a very badass moment in this scene to claim her agency and also show a bit of her own power as a force to be reckoned with.

PLus, I REALLY liked drawing the NecroJarl. Rest in frozen peace.