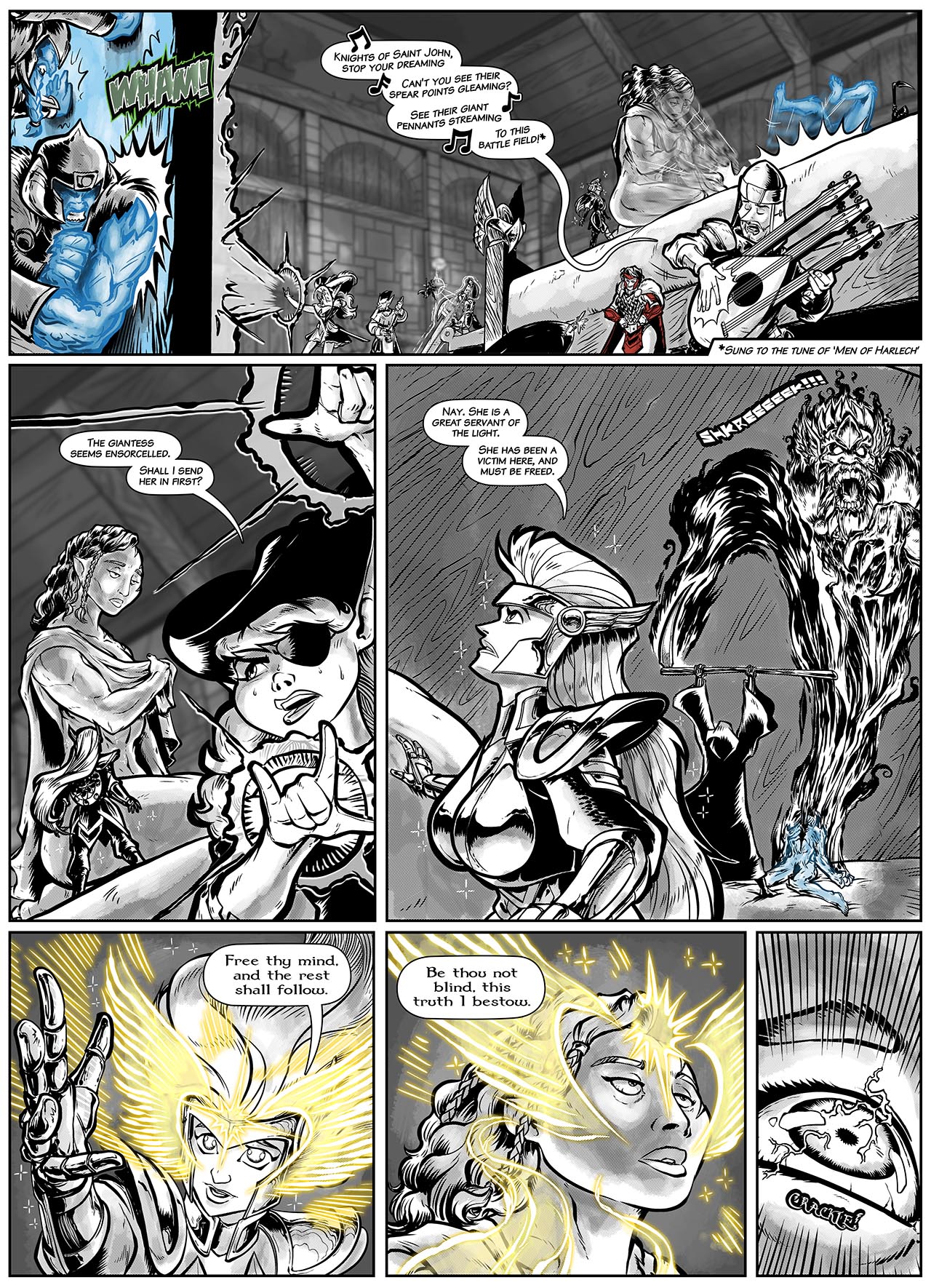 As the frost giant guards on the other side of the door start ‘trying harder’ to get that door open, Flynna is once again on hand with a magical force wall to keep them out while the party preps for the battle to come. As the giantesses Ronni had shrunk down on the bed spring back to size, her power’s effects having run out, Britomart recognizes the giant in mind bondage.

I don’t wanna give anything away, but I think the last panel let’s you know just which kind of giant she is…

Dirk Swann’s song is an adaptation of Men of Harlech, which being in no manner Welsh, I was unfamiliar with. At least I was before my friend John convinced me to watch Zulu, which Bruce Williamson once described as “the film that teaches you how to be a man”. Leftenant Chard calling on Private Owen to rouse the men was the first time I understood bardic inspiration, how song and traditions could inspire men to rally and fight courageously. It battles back the sense of dread and inevitability that is projected by the Zulus singing the funeral dirge for the men of Rourke’s Drift.

Music changes morale, and morale effects ability. The song starts around 2:32 or so, but it’s worth watching the entire scene.

No top tenors’ll get you every time. Dirk Swann? Top tenor, yo.

Beyond all that, I LOVE how Flynna’s face came out in panel 2, a touch of sweat to show the strain, as she casually mentions sending in the mind-controlled giantess first. Kind of cold, but Flynna is a neutral, and a chaotic one at that, so she doesn’t care about a stranger she meets in a dangerous situation.

Could be worse, as what you think is happening to the frost giant king is EXACTLY is happening. It could be argued that Britomart, as a servant of good and law, should put a stop to that. But this is a servant of Death- just as she is the hand of Vanu, so too is Karloff touched by Death, and in both their orders, they adhere to strict laws and regiments. Karloff’s is just more neutral than good, as is Death. Plus this is a temporary effect, not the creation of a permanent undead abomination. Just the spell duration makes it acceptable.

Last but not least, big shout-out to the freedom from mind bondage spell (the counterspell to the one in that Chick book Dark Dungeons, page 7: https://www.chick.com/products/tract?stk=0046 ). Which I’ma let Dee elaborate on in her notes, as I have talked a lot about a seemingly simple page here.

In all seriousness, though, the biggest hurdle to figuring this page out was in determining the scale of everything. The room itself is proportioned for giants that are roughly 24 feet high, give or take. This makes our heroes all look dang small and the room enormous. And since the script called for activity in multiple corners of the room in the first panel along with a cutaway showing the other side of the door, it took some doing to figure out the camera angle.

Ultimately, Sabrina and I talked it out and roughed out a couple of different POV’s to sell the scene, deciding on this one.

Another key detail I wanted to focus on here was just how ripped to make our ensorcelled giantess here. The character is both huge AND built, but she’s also at rest. As such, her muscle definition is NOT what it will be when she is moving. It’s an art pet peeve of mine that so many superheroes look like they are CONSTANTLY flexing no matter what they’re doing. lol